Cal Poly will not tolerate academic cheating or plagiarism in any form. Academic dishonesty is addressed both as an academic issue and as a disciplinary incident under the CSU Standards for Student Conduct. Cases of class cheating or plagiarism shall be handled by faculty members under established procedures that include written notice to the student of the incident and the consequent grade. This response is, by its nature, limited to the particular class incident. The faculty member shall then submit an online report to Student Rights & Responsibilities. This office will consider the reported incident and the academic response in the broader context of the student’s overall conduct. 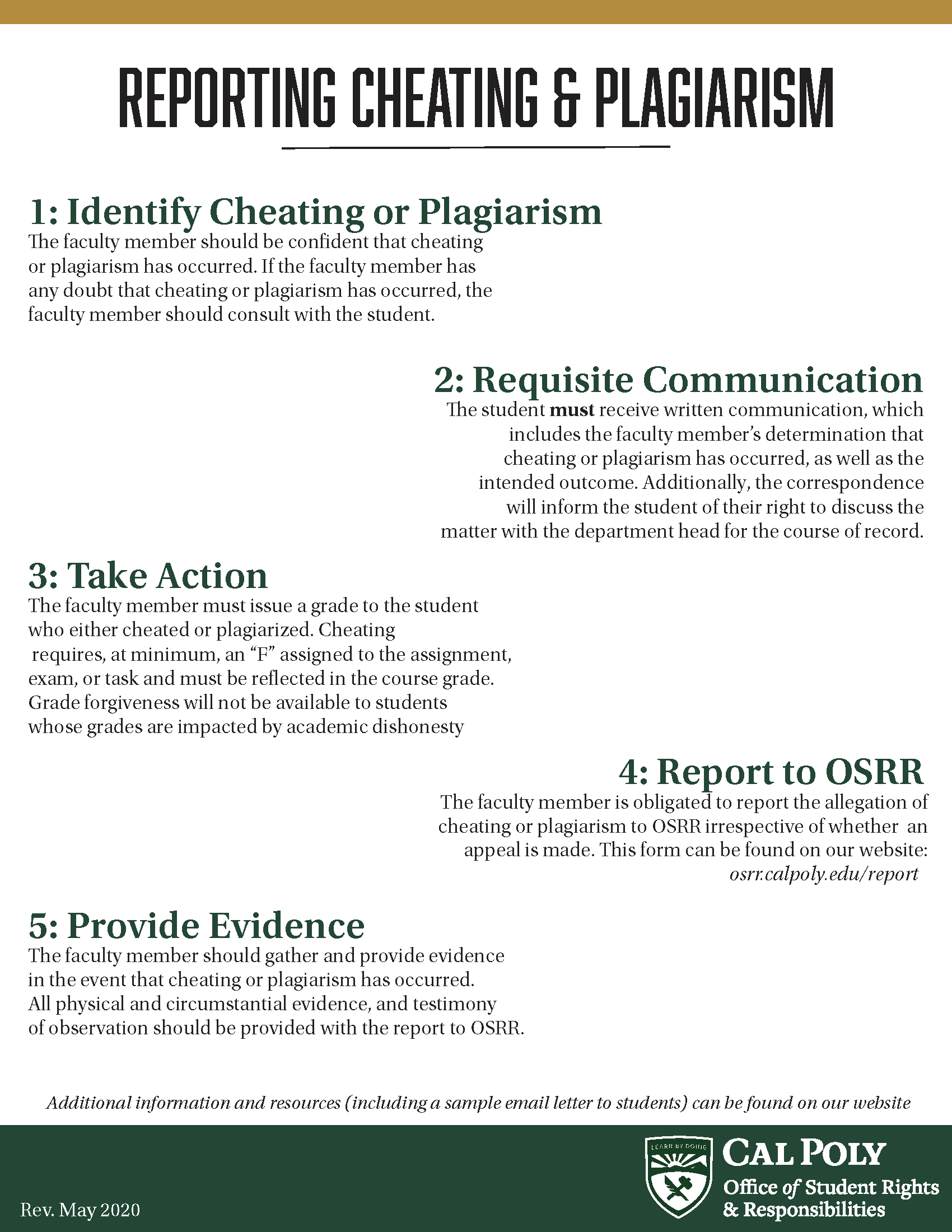 Dear Cal Poly Faculty - A letter from our Director to Faculty regarding cheating and plagiarism allegations.

Cheating is defined as obtaining or attempting to obtain, or aiding another to obtain credit for work, or any improvement in evaluation of performance, by any dishonest or deceptive means. Cheating includes, but is not limited to: lying; copying from another's test or examination; discussion at any time of questions or answers on an examination or test, unless such discussion is specifically authorized by the instructor; taking or receiving copies of an exam without the permission of the instructor; using or displaying notes, "cheat sheets," or other information devices inappropriate to the prescribed test conditions; allowing someone other than the officially enrolled student to represent same.

As defined, according to the American Psychological Association (APA) Manual 2009, cheating includes, but is not limited to:

Cheating is considered to be unethical by the University. However, overt cheating (e.g., looking off another student’s test) is what is of consequence to the University.

Plagiarism is defined as the act of using intentionally or unintentionally the ideas or work of another person or persons as if they were one’s own without giving proper credit to the source. Such an act is not plagiarism if it is ascertained that the ideas were arrived through independent reasoning or logic, or where the thought or idea is common knowledge. Acknowledgement of an original author or source must be made through appropriate references, i.e., quotation marks, footnotes, or commentary. Examples of plagiarism include, but are not limited to, the following: the submission of a work, either in part or in whole, completed by another; failure to give credit for ideas, statements, facts or conclusions which rightfully belong to another; failure to use quotation marks (or other means of setting apart, such as the use of indentation or a different font size) when quoting directly from another, whether it be a paragraph, a sentence, or even a part thereof; close and lengthy paraphrasing of another’s writing without credit or originality; and use of another’s project or computer programs or part thereof without giving credit.

What happens if my professor thinks that I may have cheated/plagiarized?

What if I did not cheat/plagiarize?

If you deny cheating or plagiarizing, two actions will be afforded to you: 1), you will be given the opportunity to meet with the department head to determine if the situation can be resolved, and 2) you can appeal a finding of cheating or plagiarism through OSRR.

Can OSRR change my grade if I'm found to be not responsible for cheating/plagiarism?

The Office of Student Rights & Responsibilities does NOT have the authority to change a grade, that is the responsibility of the professor of record for the course, or the Provost, who is the Chief Academic Officer. All academic-related matters, including grades, fall under the academic function of the university. The “appeal” to OSRR referred to in AS-722-10 determines whether a student can appeal their grade reduction to the Fairness Board, which will then make a recommendation to the Provost.

What if I was already reported to OSRR for cheating/plagiarism?

In situations where the behavior has already been reported to OSRR, and where an investigation into the alleged student misconduct results, there will be no need for a formal appeal, as OSRR will already be investigating the alleged behavior. OSRR will process cases and appeals as quickly as possible. However, investigations can take up to 40 working days to complete. If OSRR determines that it is more likely than not that your actions constitute cheating or plagiarism, then you will not be able to appeal the grade with penalty to the Fairness Board.